The Sky is Everywhere – Jandy Nelson 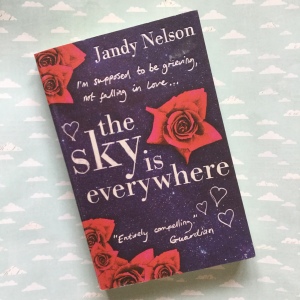 “Gram is worried about me.”

As I write this, I still have most of the book yet to read. I thought it would be useful to write a bit about what I think of it so far, even though I’m only 62 pages in. I’ve been excited to read this one for a while, and I feel like there’s been so much praise of it that I’ve built my expectations up. I read I’ll Give You the Sun by the same author and LOVED it, so I hoped I would love this one too.

What I think having only read up to Chapter 8, page 62:

The basic premise to this novel is: Lennie Walker’s sister has died. In the wake of her sister’s death, Lennie becomes a bit boy-obsessed, which is unlike her. Cue new guy at school and grief-stricken Toby (her dead sister’s boyfriend). At the point I’m reading, she currently has feelings for Toby, and they’ve already kissed, because he has feelings for her too. But, alongside this, the new guy Joe is showing an interest in her. I like Joe, I can handle her having feelings for him. But I’m finding it hard to get into this, because there’s too much going on. There’s the storyline of her sister dying, the storyline of the love blossoming between her and Toby, and the storyline of her and Joe. Also, I’m finding the style of writing difficult in places. Since starting it, I’ve had to re-read certain sentences and try and work out what they are saying. I hope this gets better!

What I think after reading the rest:

Okay, so it wasn’t as bad as I thought, but it definitely didn’t live up to my expectations. Although it was a good enough story, and I found myself wanting to know what happened next, I did find it a bit unrelatable and unrealistic. The actions in the novel only happen because Lennie’s sister has died, but I don’t feel like I know her sister very well, or that she’s a big part of the story. I mean, she is significant, yes. But more significant is Lennie’s sudden interest in boys. I loved Joe’s character so much, but I feel like the relationship between them was just a bit too perfect. She longs for the love she reads about in classic novels, and I feel by the end it’s all just too predictable.

What I did like was the handwritten notes. I worked out their significance early on, and I don’t know whether the author meant for the meaning to be obvious, whether I’m just good at working things out, or whether it was another predictable element of the book. But in any case, I enjoyed those parts. Mostly for the visual aspect and that they added a bit of arty-ness to the book.

I’ve given it 4 stars, but that’s only because it wasn’t such a disaster as I thought it was going to be in the beginning. I did like it in the end, but it didn’t have a massive impact on me. It’s not as good as I’ll Give You the Sun that’s for sure. But I do like it. It’s a nice read, but not an emotionally moving one, for me anyway.

The Sky is Everywhere