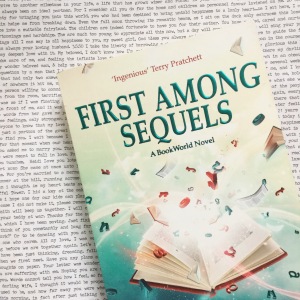 “The dangerously high level of the Stupidity Surplus was once again the lead story in The Owl that morning.”

Beloved for his prodigious imagination, his satirical gifts, his literate humor, and sheer silliness, Jasper Fforde has delighted book lovers since Thursday Next first appeared in The Eyre Affair, a genre send-up hailed as an instant classic. Since the no-nonsense literary detective from Swindon made her debut, literature has never been quite the same. Neither have nursery rhymes, for that matter. With two successful books of the Nursery Crime series under his belt, Fforde takes up once again the brilliant adventures of his signature creation in the highly anticipated fifth installment of the Thursday Next series. And it is better than ever.

It has been fourteen years since Thursday pegged out at the 1988 SuperHoop, and Friday is now a difficult sixteen year old. However, Thursday’s got bigger problems. Sherlock Holmes is killed at the Rheinback Falls and his series is stopped in its tracks. And before this can be corrected, Miss Havisham dies suddenly in a car accident, bringing her series to a close as well. When Thursday receives a death threat clearly intended for her written self, she realizes what’s going on – there is a serial killer on the loose in the Bookworld. And that’s not all: The Goliath Corporation is trying to deregulate book travel. Naturally, Thursday must travel to the outer limits of acceptable narrative possibilities to triumph against increasing odds.

Packed with word play, bizarre and entertaining subplots, and old-fashioned suspense, Thursday’s return is sure to be celebrated by Jasper Fforde’s fanatical fans and the critics who have loved him since the beginning.

Straight away I am going to make two things clear:

The beginning of my journey with the Thursday Next series began when someone recommended The Eyre Affair to me after I had outlined the plot of my creative writing dissertation. The common denominator is that my story features a fictional character who has come to life in the real world, and that Jasper Fforde’s series is based entirely around a connection between the Real World and the Book World, where fictional characters are real in their own right.

So I enbarked on the journey, and I reached book five. Then I stopped, and put First Among Sequels back on my shelf and left it there. There were two reasons for this:

But last week, my friend bought Jasper Fforde’s novel The Fourth Bear which is the second book in the Nursery Crime series featuring Jack Spratt. He sent me a funny quote (of which there are plenty in Fforde novels) and this gave me a hankering for his writing, and made me miss the adventures of the literary detective Thursday Next. So I got this book back off the shelf, turned to page 91 (which is where I had read to when I decided to abandon it) and continued reading. Within the first five minutes I was crying with laughter!

Jasper Fforde never ceases to amaze me with his wit, brilliance, and humour. The jokes aren’t explicit in their ability to make you laugh, they are subtle. A word placement here, a phrase there, and then a pun for good measure. It’s funny without trying too hard. The only criticism I would make is that, the humour is funnier when you haven’t experienced it for a while, but I find that after reading the novel constantly, I become used to the style of jokes. I am therefore less likely to laugh out loud multiple times in the space of five minutes, as I did on my return to his writing. Nevertheless, the humour is unlike anything I’ve read before, and is truly unique and worth experiencing.

Although the book is fun to read, it takes a lot of thinking. You need to know the series inside out in order to have a grasp on everything that happens, and you need to pay attention. Fforde is good and inserting little hints and clues that may seem insignificant at the time, but will lead to a lightbulb moment a few chapters later. There’s exploration of time travel that is utterly brilliant, but if you aren’t paying attention, can possibly become confusing or simply go straight over your head. Fforde’s writing is too good to be read by a passive reader. So make sure you’re alert and in the mood for this book when you read it. The same goes for the rest of them!

This book is not a stand-alone book, and if you do come across First Among Sequels then I’d recommend starting at the beginning of the series, because otherwise this book will not make a lot of sense, and you’ll miss out on understanding a lot of the references to previous novels (of which there are a lot. References AND novels). I believe the first book in the series The Eyre Affair is one of the most brilliant books ever, so start there, and if it takes your fancy, then congratulations! You will find yourself with an abundance of reading pleasure awaiting you.