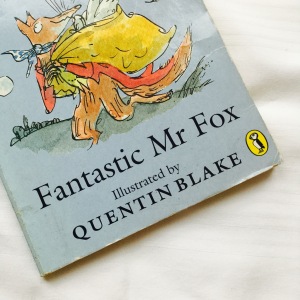 “Down in the valley there were three farms.”

Boggis, Bunce, and Bean are just about the nastiest and meanest three farmers you could meet.

And they hate Mr Fox. They are determined to get him. So they lie in wait outside his hole, ready to shoot, starve or dig him out. But clever Mr Fox has other plans!

Find out what those plans are in this hilarious story, perfectly complemented with illustrations by Quentin Blake.

Fantastic Mr Fox is an okay story which is mostly fun to read. With a lot of reviews of Roald Dahl children’s books, the key factor is, should you read this book to your child? I think this one is a good one to read, although there are moments that I feel might inject fear into any child.

The situation is cruel: Three farmers, and all their workers are waiting to kill Mr Fox and his family for stealing their animals off their respective farms. Mr Fox’s children must be traumatised! It’s either get shot or starve to death, and their mother seems to accept that this is their fate. I don’t know whether I’d want my future children to have to listen to a story that brings death and mortality to the fore.

The mother is a bit of a non-character: she loves her children, as any mother would, but when it comes down to trying to save the situation, she has become too weak and it’s up to Mr Fox and all four children to help the family. Mrs Fox is the mother, she is supposed to be strong enough to feed her four children, or at least have more strength than them. They’ve all been starving for the same amount of time…yet Mrs Fox the adult, is weaker than her four little ones! Basically, I think she deserved better than to be assigned the weak female role.

The rest of the plot was entertaining enough to read, and was more full of hope than the fear of starving to death. I thought there might be more danger towards the end, but once Mr Fox had ‘fantastically’ saved his family AND all his neighbours, there were no more problems to face.

The ending brought a smile to my face, thereby redeeming any doubts I had had previously. It’s not going to become a favourite, but I’m glad I’ve read it.