Holding Up the Universe – Jennifer Niven 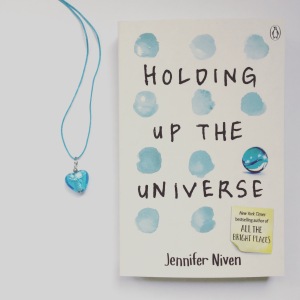 “I’m not a shitty person, but I’m about to do a shitty thing.”

From the author of the New York Times bestseller All the Bright Places comes a heart-wrenching story about what it means to see someone – and love someone – for who they truly are.

Everyone thinks they know Libby Strout, the girl once dubbed ‘America’s Fattest Teen’. But no one’s taken the time to look past her weight to get to see who she really is. Since her mum’s death, she’s been picking up the pieces in the privacy of her home, dealing with her heartbroken father and her own grief. Now, Libby’s ready: for high school, for new friends, for love, and for EVERY POSSIBILITY LIFE HAS TO OFFER. I know the part I want to play here at MVB High. I want to be the girl who can do anything.

Everyone thinks they know Jack Masselin too. Yes, he’s got swagger, but he’s also mastered the art of fitting in. What no one knows is that Jack has a secret: he can’t recognize faces. Even his own brothers are strangers to him. He’s the guy who can re-engineer and rebuild anything, but he can’t understand what’s going on with the inner workings of his own brain. So he tells himself to play it cool: Be charming. Be hilarious. Don’t get too close to anyone.

Until he meets Libby. When the two get tangled up in a cruel high school game which lands them in group counseling, Libby and Jack are both angry, and then surprised. Because the more time they spend together, the less alone they feel. Because sometimes when you meet someone, it changes the world – theirs and yours.

I have lots to say about this book, and it means getting deep into the plot, so read at your discretion, but I have given you fair warning that there are spoilers ahead.

When I saw this book, I didn’t hesitate to buy it. I’d read All the Bright Places and really enjoyed it, so I figured (hoped) I would like this one too either just as much or even more. My verdict? It was okay, but didn’t live up to my expectations, and there were various moments when I found myself questioning plot and character decisions that the author has made, and being unaffected by moments that were clearly written to evoke an emotional response.

Just like ATBP we have two main characters, Libby and Jack. One thing I love in YA novels is when each chapter is told from a different characters’ perspective, this makes it easier to read and gives the book a sense of pace, and ensures there’s no boredom in the reader.

Libby is a girl who was formerly America’s Fattest Teen. However, I think Niven could have gone into a lot more detail with this, seeing as it’s a basis for Libby’s entire narrative. We know that her Mum (or Mom if you’re American) passed away, and that this was the trigger for Libby’s weight gain. It got to the point where she had to be lifted out by a crane. Now, I’ve seen stories in the news of similar cases, but that’s just it, my own recollection of these stories in the media was the only basis I had for imagining what Libby used to look like. What I needed here was description rather than the numbers. Weighing 653 pounds means nothing to me. Therefore, losing weight that is equivalent to two whole people also means nothing to me. It felt like Niven was establishing the fact that she was grossly overweight in the simplest way possible, to then rush to the events of the present day. Also, Libby Strout is almost too much of a play on words, and is acknowledged in the novel as being representative of ‘lbs’ and ‘stout’, two strong associations with being overweight. It’s too obvious for me, too much of a coincidence.

Then we have Jack, and nobody would tell you off for calling him ‘Jack the lad’ because that’s just what he is, or at least who he tries to be. His story-line is much more interesting, he has prosopagnosia. This was something I’d never heard of prior to reading this book, so good on Niven for giving the condition some attention. Everyone who reads this book will know about it and be aware of it, and that’s a Good Thing. This condition lends itself brilliantly to fiction, and brings up many questions:

I could list more, but we didn’t really get the benefit of having a character with this. What is established is that Jack knows people by their identifiers. So, if someone has a pointy chin or sticky out ears, or big hair. At the beginning, he seems to cope quite well, but there are a few instances when it causes him trouble. When he’s playing basketball and gets his teammates mixed up, he kisses his on/off girlfriend’s cousin instead of her, he almost kidnaps a random child, thinking it’s his brother.

I know this is YA, but I think it could have been introduced better than in the letter that opens the novel. Yes, it’s a serious condition, but have fun with it when you’re writing fiction! The most interesting parts was when Jack began researching the condition, because then facts were included, and I can stand by facts.

Without giving too much away, this book would have been a lot better if there was less of a focus on love, and bringing Jack and Libby together. Personally, I don’t think they’re that compatible, even though they come together and are inextricably connected from the start. They would have made better friends than anything, because what they both need is a friend who they can each share their problems with, without love getting in the way. There are more important things than love, and I want to read a YA novel that drives this message home. For me there needed to me more in depth discussions and explorations of both Libby’s eating disorder and Jack’s mental condition. The impression I got is that Libby is doing okay with her eating, in fact, she barely ate during the entire book, and that Jack is stubborn about his condition and is making life hard for himself. It was akin to someone gay being in the closet, too scared to come out. I don’t think that should have been aligned with a serious neurological disorder like prosopagnosia.

Also, Niven brushes past opportunities for significant scenes. When Jack and Libby are sat in their last session of Conversation Circle, everyone in the group is required to say five nice things about everyone else there. The only things that are explicitly told are:

We don’t get anything about Libby from anyone else other than Jack (and we already know buckets about how he feels about her and what he thinks!) and it was Libby who should have been the focus of that scene, not Jack. We get the point that nobody knows what he’s going through, and we also get that Libby is always being talked about negatively, and being sent horrible letters from people…here was a chance to redeem some faith in her peers. They must have said something, but Niven brushes past it.

Love. Love can go without saying. Love doesn’t always have to be mushy and beautiful. YA novels are supposed to counteract all the stuff that are fed to us through romantic Hollywood films, but this one just feeds us more gush. I found that some of the descriptions of how Jack feels about Libby and vice versa were just unbelievable, waaay over the top, and unrealistic.

Libby [on what would happen if Jack kissed her]: “My body might just explode into a million pieces of shimmering, glittering light.” p. 229.

Towards the end, Jack realises he recognises Libby without having to see her, and he says, “I’m pretty sure I see you because I love you.” But can we just put love to one side for a minute? He has a neurological disorder, and suddenly there’s an exception. Libby is the exception, and yes this makes for an incredibly romantic thought, but this is a condition for which there is no cure! So if all of a sudden someone he loves can be recognised, this is a huge thing. Part of the condition is that people can’t even recognise the ones they love, like their own family…so now all of a sudden Jack’s love for Libby is stronger than for his family? I understand why Niven decided to go this way with it, and as much as it makes for a happy ending, I just think it’s too cheap to use the condition for a love story.

That’s not to say I didn’t look forward to reading the book and returning to it each day. It was a great story, but could have been executed better considering the nature of the characters’ lives. However, I appreciate what Niven wrote in the Acknowledgements section. I enjoyed the read, but not the focus on love.

Holding Up the Universe