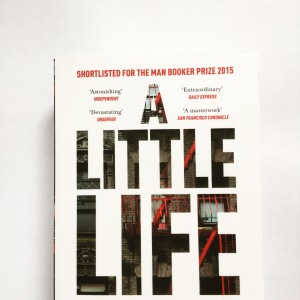 “The eleventh apartment had only one closet, but it did have a sliding glass door that opened onto a small balcony, from which he could see a man sitting across the way, outdoors in only a T-shirt and shorts even though it was October, smoking.”

When four classmates from a small Massachusetts college move to New York to make their way, they’re broke, adrift, and buoyed only by their friendship and ambition. There is kind, handsome Willem, an aspiring actor; JB, a quick-witted, sometimes cruel Brooklyn-born painter seeking entry to the art world; Malcolm, a frustrated architect at a prominent firm; and withdrawn, brilliant, enigmatic Jude, who serves as their center of gravity. Over the decades, their relationships deepen and darken, tinged by addiction, success, and pride. Yet their greatest challenge, each comes to realize, is Jude himself, by midlife a terrifyingly talented litigator yet an increasingly broken man, his mind and body scarred by an unspeakable childhood, and haunted by what he fears is a degree of trauma that he’ll not only be unable to overcome—but that will define his life forever.

Every so often, a book comes along that changes the way you see the world around you and makes you think closely about your life, and the lives of the people you know and love. This is one such book.

Sometimes when I see a book for the first time, even though I know nothing about it, I know I want to read it. I saw this one, and I sensed that it was the kind of book I’d like to read, that would have characters in that I’d love. My instinct was right.

The main characters are a group of friends, all male: Jude, JB, Willem and Malcolm.

I struggled with reading it at first, and I kept getting confused about which character we were focusing on. Since most of the characters are male, it took me a while to distinguish who the ‘he’ was referring to in any given chapter or section. But once I had learned their individual stories, I found it easier to follow.

I’d say the first quarter of the book is the least compelling, but is essential because it outlines the backgrounds of each character. But because it didn’t draw me in as much, I forgot their back stories which made for confusing reading when certain aspects of their past were referred to later on in the book.

My favourite two of the group are Willem and Jude. I didn’t care much for JB and Malcolm, and it is those two I kept forgetting about until they were referred to. My overall impression regarding the group of friends is that Jude is the the glue that binds them. In the same way, he is the one who makes this book what it is. He is the one with the ‘little life’ that the book’s title alludes to.

I love Jude. I love that there’s a book with a man who isn’t physically strong or stereotypically manly and dominating. He is extremely sensitive, withdrawn, private. He is emotional, and essentially broken. But his brokenness is what makes him so endearing. He breaks my heart, but he warms it as well, and this is the kind of male protagonist I can really engage with.

Another thing I love about this book is it’s exploration and representation of sexuality. It is an LGBT book without being obvious or explicit. Well, it is explicit, but not in a way that an Alan Hollinghurst, or an Edmund White book is. I wouldn’t group it with those kind of LGBT books. It is a novel that just happens to have LGBT characters, but their sexuality is dealt with subtly, and I’d also say with respect and care. The narrative isn’t defined by its character’s sexualities.

For me, the most important thing I’ve taken away from my experience reading this book is that it is truly emotionally grueling. It takes a lot for me to cry at a book, and I wanted to WEEP. I stopped myself, I had to. I stopped reading because I would have ended up crying in public. I could feel that I was about to have my heart broken.

There’s something that makes this book unlike any I have ever read before. I’m gripped, I’m happy on the verge of heartbreak, I feel like I’m on solid ground but that the floor could crumble beneath me at any moment while I’m reading.

The writing is beautiful without being too elaborate.

It’s an unforgettable book, but it’s a heavy read and you need to be prepared for it, and for some people it might have a triggering effect. There’s explicit description of self-harm, child abuse, sexual abuse, domestic violence and suicide. So read with caution and care if you think you will be affected by any of these things.

Finally, there are some very profound quotes in this book, and there are so many that stood out to me personally, that they deserve their own blog post, so look out for that next!