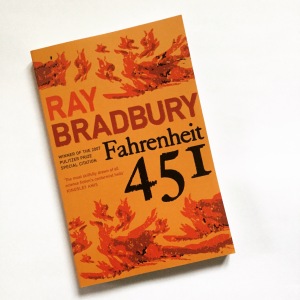 “It was a pleasure to burn.”

The terrifyingly prophetic novel of a post-literate future.

Guy Montag is a fireman. His job is to burn books, which are forbidden, being the source of all discord and unhappiness. Even so, Montag is unhappy; there is discord in his marriage. Are books hidden in his house? The Mechanical Hound of the Fire Department, armed with a lethal hypodermic, escorted by helicopters, is ready to track down those dissidents who defy society to preserve and read books.

The classic dystopian novel of a post-literate future, Fahrenheit 451 stands alongside Orwell’s 1984 and Huxley’s Brave New World as a prophetic account of Western civilization’s enslavement by the media, drugs and conformity.

Bradbury’s powerful and poetic prose combines with uncanny insight into the potential of technology to create a novel which, decades on from first publication, still has the power to dazzle and shock.

If you read any edition of this book, read the 50th Anniversary Edition. Not only do you get the brilliant story itself, but you get an introduction and an afterword by Ray Bradbury himself. The story wouldn’t be what it is without the story behind it.

When reading this, I felt the way I did when reading George Orwell’s 1984, except this one is about books. Sometimes it is surreal, sometimes the words are dream-like, and other times the plot will leave you feeling genuinely on edge with fear for Montag.

It’s a short novel, and I thought it would be longer than it is, but nevertheless I enjoyed the journey this book took me on, and I’m inspired by the intro and afterword.

View all my reviews

This is a book I’ve waited a long time to read, and I’ve finished it wishing it had been longer! It’s been a good while since I read George Orwell’s 1984, but this had the same feel to it, and took me into the same mind set when imagining the dystopian society that features in this story.

In my Goodreads review I noted that the particular edition I read played an important role in my overall experience of the novel. This is because of the Introduction and Afterword that we get from the author. He tells us how he came to write the novel, and his own process of setting it down and how it developed into the classic we know today.

As a writer and lover of books, the fact that the story was bookended by the authors own words means that I began this book inspired, and I finished it even more inspired.

The story itself gave me a range of emotions. It began in a surreal way, and I could tell that Bradbury is predominantly a short story writer, because he was able to successfully convey the dystopian society and two brilliant characters clearly very early on. I connected to them straight away, and love the character Clarisse and wish she had been a bigger part of the narrative. Her dialogue was spot on, entertaining, funny and made me think deeply about the world we live in now, as well as the world she inhabits.

Guy Montag, our main character, is everything a protagonist of this genre should be. He reminded me of Winston Smith from 1984, but he was his own character. Conflicted, curious, stepping close to danger and in a state of trying to figure out who he is and what he really wants from life.

The only criticism I would make is that he developed too fast. This is only a short novel, but it would have benefitted from being just that bit longer. I wanted more contact between Montag and Clarisse, and therefore more time to see Montag as a fireman and get a wider sense of the dystopia he lives in. It just seemed that after only one instance of seeing him do his job, and therefore only one occasion out of many for him, that he should suddenly change his mind about what he thinks of books being burnt. Clarisse had a heavy influence on this, hence why I think she should have featured more.

The mechanical hound gave me the creeps. I was surprised at how scary a concept it was. Three factors to insight fear: Mechanics, eight legs, needle. Set that thing onto a target and I can’t think of anything more frightening. Bradbury did an incredible job coming up with the mechanical hound and bringing it to life in such a terrifying way.

I won’t give away the ending, but I love the imaginative ideas expressed towards the end, and the hope it leaves us with.

If you get this edition, please take the time to read the introduction and afterword. I can say with confidence that if I had read an edition without both these sections, the story wouldn’t have made even half the impact on me that it has.