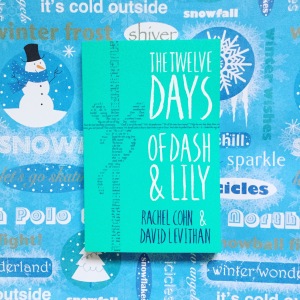 “I had been dating Lily for almost a year, and no matter what I did, I couldn’t get her brother to like me, trust me, or think I was remotely good enough for his sister.” – Dash

Dash and Lily have been dating for nearly a year, but when Lily’s beloved grandfather falls ill, the repercussions take their toll on everyone. Even though they are still together, somehow the magic has gone out of their relationship and it’s clear that Lily has fallen out of love with life.

Action must be taken! Dash teams up with Lily’s brother and a host of their friends, who have just twelve days to get Lily’s groove back in time for Christmas.

I have fond memories of being introduced into the world of Dash & Lily, when I read the first book they appeared in, Dash and Lily’s Book of Dares. I loved the premise to their relationship, and the ending was one of those perfect, all strings tied up neatly, hopeful, happy endings. So…here I was again about to find out what has happened since that moment.

Dash and Lily have been together almost a year, and although it’s nearly Christmas, the spark that set their relationship off in the previous book just isn’t there. Dash is undoubtedly one of my favourite characters in YA literature, and reading this book has confirmed something for me. You know when you get asked who your literary boyfriend would be? Well snarly, bookish Dashiell would be mine! But he isn’t too good to be true, he has an edge to him, yet he is fond of obscure words and classic literature.

Lily, on the other hand has had a lot to deal with. Her Grandad had a heart attack, and she took it on herself to look after him. This has resulted in her becoming ever-distant from Dash, and also lacking in Christmas spirit. So the book starts on rocky ground, and for the first half I just wanted to bang their heads together. Dash was trying his best, but thinking too much and trying to do the right thing too much. Lily was being moany and hard to please, but also sad thinking that Dash was losing interest in her.

This is why I love the style this is written in. We have two authors and two perspectives. We get both perspectives, so we know what is going on in each of their heads, and I just wanted to scream at them both for misunderstanding each other so much!

In terms of reading enjoyment, I enjoyed Dash’s chapters best, and found Lily a bit annoying. Recently, I realised that male narrators appeal to me more, and as a reader are a lot more engaging to read and connect with. It also came to my attention, after reading a blog post by Read and Seek that this might be down to the way females are portrayed in YA novels as easily annoyed, always-creating-drama, over complicated ‘typical’ girls. I use the word typical as a way to refer to the steriotype that seems to attach itself to teenage girls in YA novels.

When I reading this book, I shook my head when I realised Lily had become one of these girls. Gone was the adventure-seeking imaginative girl with the red Moleskine, and here was a moody girl who always seemed annoyed at her sweet boyfriend. However, Lily is aware of this behavior, and so I assume so was the writer.

Here are some examples that had me shaking my head:

“I don’t know why I was acting so whiny besides that I was having an existential crisis and I’m just moody and awful.”

“Now I’ve become one of those girls! One who needs him to tell her he loves her because she’s so neurotic she has to hear it from him to feel, like, validated in her feelings for him. I hate that.”

At this point, I began to understand that this isn’t so much a negative portrayal of a female character, but an example of an interesting, creative, business-minded girl who has had a tough time and thinks the world is against her, and end up becoming this stereotype and taking it out on her boyfriend. Bless Dash for putting up with her! What affirmed this was when her mother gave her some much-needed, accurate advice:

“I think it’s your responsibility to be honest with him about it and not wait for him to tell you something he has no idea you’re waiting to hear.”

If Dash had been there, I’m sure he would have applauded. But he wasn’t there, and I still wanted to smash their heads together! I won’t tell you how it all worked out, but I gave this book 4/5 stars because the first half was a bit on the negative side and very Lily-centric, all the while she was being the kind of girlfriend who didn’t deserve the lovely things Dash was doing to try and bring her Christmas spirit back.

But I must say, this narrative is taken day by day leading up to Christmas, so if you can read it on those dates, or around those dates, or even on Christmas Day itself, I’m sure you won’t regret it. It’s prequel is also Christmas-themed, and if you haven’t read Dash & Lily’s Book of Dares then pleeease go and read it and fall in love with these characters.

I hope there will be more Dash & Lily books in the future. Here are a couple more quotes that caught my eye:

“…it doesn’t matter whether the story’s true or not. What matters is the care that’s been put into the story. The love.” – Dash

“…there are some things you can’t control, and time is, like, number one on that list.” – Dash

Link to the book on Goodreads: The Twelve Days of Dash and Lily