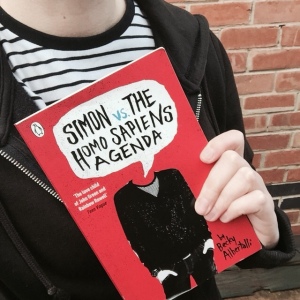 Sixteen-year-old and not-so-openly gay Simon Spier prefers to save his drama for the school musical. But when an email falls into the wrong hands, his secret is at risk of being thrust into the spotlight. Now Simon is actually being blackmailed: if he doesn’t play wingman for class clown Martin, his sexual identity will become everyone’s business. Worse, the privacy of Blue, the pen name of the boy he’s been emailing, will be compromised.

With some messy dynamics emerging in his once tight-knit group of friends, and his email correspondence with Blue growing more flirtatious every day, Simon’s junior year has suddenly gotten all kinds of complicated. Now, change-averse Simon has to find a way to step out of his comfort zone before he’s pushed out—without alienating his friends, compromising himself, or fumbling a shot at happiness with the most confusing, adorable guy he’s never met.

This is a book that I’d heard of for ages and always fancied reading. But I never got a copy of it, and it would slip from my mind until I’d see it pop up on social media somewhere and then I’d think, ‘Oh, I still need to read that.’

Then I heard about the film version, Love Simon. I avoided watching the trailer because I desperately wanted to go into the book knowing as little about it as possibly. But what I did know was this: Simon is gay, but he’s still in the closet. Thanks to an email, his secret identity (as a gay person) is to be compromised and used for blackmail. All this while he is in school and only sixteen years old.

I ordered a copy of the book, and started to read it. It’s one of those books which alternates between normal prose, and a story told through email messages. I love books that do this, especially in YA. The book is narrated by Simon, so we see everything from his perspective, putting us into his shoes.

There’s lots of internal musings on the subject of coming out, and an email discussion under the name of ‘Jacques’ with his anonymous ‘pen pal’ Blue (who goes to the same school as Simon). This is the trigger for Martin Addison to start blackmailing Simon into setting him up with Abby, the girl he likes. And so begins the journey of Simon being worried tat everyone will find out he’s gay, while pouring out his feelings to Blue, who things are getting flirty with.

My first reading session took me 50 pages, but then one night I sat down with the book again and that was it, I stayed up all night. I couldn’t put the book down. This may sound like a simple ‘coming out’ story, but it’s got so many different layers, and friendship/relationship dynamics that there’s just no putting it down. I had to know how it all turned out.

It's 1am but I had no idea because I was too absorbed in this book & just finished the whole thing. Amazing. Why did I not read this sooner? @beckyalbertalli ❤️ pic.twitter.com/0lNCzQaMWD

My favourite characters were obviously Simon and Blue. And one of the things that kept me reading was the fact that we don’t know who Blue is. I couldn’t even take a guess, although while reading my mind was looking for clues, but so was Simon. There was a sense of joint investment between Simon and the reader to find out his identity. But at the same time, being anonymous and using alter-egos is what makes emailing Blue so special. Finding out his identity would mean the emails would stop. I became so involved in this narrative.

In terms of the other characters, I would sometimes find it difficult to remember who was who, because unlike a lot of YA novels I’ve read, Simon is actually pretty popular and he has a decent group of friends. Nick and Leah are his best friends, who he’s known since a young age, but I never really connected with them. Abby seemed to be the better friend, but, I guess he was being blackmailed to set her up with Martin. I didn’t like Leah, she seemed too jealous, and ended up on the sidelines of the story, which is bad for her but, I wasn’t that bothered anyway. Nick is just Nick (but at one point I thought he would be Blue!)

The ending is amazing, and I won’t spoil it for you, but I doubt that any reader will be disappointed with how it works out. I didn’t guess who Blue was, right up until the moment it was revealed. This book has everything I want in a YA. And it has become an instant favourite.

Link to the book on Goodreads: Simon vs. The Homo Sapiens Agenda