The Upside of Unrequited – Becky Albertalli 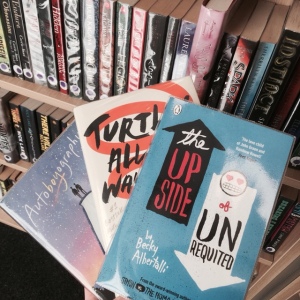 Seventeen-year-old Molly Peskin-Suso knows all about unrequited love – she’s lived through it twenty-six times. She crushes hard and crushes often, but always in secret. Because no matter how many times her twin sister, Cassie, tells her to woman up, Molly can’t stomach the idea of rejection. So she’s careful. Fat girls always have to be careful.

Then a cute new girl enters Cassie’s orbit, and for the first time ever, Molly’s cynical twin is a lovesick mess. Meanwhile, Molly’s totally not dying of loneliness-except for the part where she is.

There’s only one problem: Molly’s coworker, Reid. He’s an awkward Tolkien superfan, and there’s absolutely no way Molly could fall for him. Right?

After finally reading Simon vs. The Homo Sapiens Agenda I decided to go to the library for this book. I’d seen it, and recognised the title, I just didn’t realise it was by the same author as Simon. I borrowed the book, then went to meet a friend. While I was waiting for that friend, I started reading the book.

I sometimes struggle starting a new book, especially if I’m reading it in public. But I sat there and got completely absorbed into it. In that time, I managed to get 46 pages in. And if my friend has never turned up, I’d probably have stayed there all day.

Okay, so this time our main character is Molly Peskin-Suso. The book is narrated from her perspective. The thing about Molly is that she has lots of crushes and zero relationships. Her twin sister Cassie is opposite, she hooks up with plenty of girls, and seems intent on Molly finding a boyfriend.

At the start of the book, Molly meets Mina in the bathroom of a club. At first I thought Molly was going to have a crush on Mina, but it turns out she thinks she’ll be perfect for Cassie. She’s right, and they get together. It is then Cassie’s mission (it seems) to hook Molly up with Mina’s cute hipster best friend, Will.

It also becomes clear that Molly isn’t comfortable with her body. She calls herself fat, and thinks that this is the reason behind her never having a boyfriend. It makes her careful, and the one thing Cassie is telling her not to do is be careful, just to go with it and get past the crush stage.

“There’s just something terrifying about admitting you like someone. In a way, it’s actually easier when there’s no chance of anything happening. But there’s this threshold where things suddenly become possible. And then your cards are on the table. And there you are, wanting, right out in the open.”

I wasn’t keen on Cassie. Towards the end, I thought she was okay. But during the book I got so annoyed at her. This book has so much teenage drama in it that I just wanted to Cassie to keep her nose out of Molly’s business and just let stuff happen. She would say little offensive comments, and assume certain things, or say stuff in front of people about Molly, making her the centre of attention and I just wanted to say NO, Cassie, SHUSH. But I think this is how I’m supposed to feel.

One of the coolest things about this book is that it’s all set in the same universe as Simon. Molly is related to Simon’s friend Abby. The family is kind of complicated, in that Molly and Cassie have two mothers, and their father (who isn’t part of the story) is a donor. So through Abby, we are reunited with Nick and Simon! I got waaaay too excited about this.

The reason why I got so angry at Cassie trying to set Molly up with Will is that…Molly starts to like Reid, the guy she works with at her new job. I wanted them to be together from the moment they met, and he was Molly’s secret crush, in a way, when Cassie thought she liked Will. I felt that when she was with Reid, she had freedom to be herself, and explore this new friendship/potential crush as herself, without Cassie’s eyes burning into her. Even I, as a reader, felt a sense of freedom in these scenes. That’s how overpowering I thought Cassie was.

“…the act of talking starts to feel like this huge impossible thing. I get like this sometimes. I get locked into a cycle of not speaking. It’s like every time I think of something awesome to say, I rehearse it in my head so many times, I forget whether I’ve said it out loud yet.”

I got hooked into this book, too. I loved the drama really, and I thought all the characters were unique, believable, and brilliant. I loved Patty and Nadine (the mothers) because they feature so heavily in the book. Normally, in YA books, the parents are just…there…in the background, or having the odd conversation. But these parents are cool, and they’re a part of it. I admire that in the book. Also, this must be one of the only YA books I’ve read with so much LGBT+ representation, where the main character is straight. It’s brilliant.

This book has sealed my place as a fan of Becky Albertalli, which means that I will now read anything she puts out. So yes, I will be reading Leah on the Offbeat when it comes out (despite not liking Leah in Simon – maybe this book will restore my faith in her).

Link to the book on Goodreads: The Upside of Unrequited