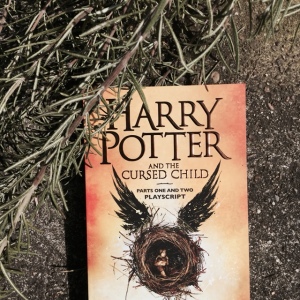 Full title: Harry Potter and the Cursed Child – Parts One and Two: The Official Playscript of the Original West End Production (Harry Potter #8)

“A busy and crowded station, full of people trying to go somewhere.”

Based on an original new story by J.K. Rowling, Jack Thorne and John Tiffany, a new play by Jack Thorne, Harry Potter and the Cursed Child is the eighth story in the Harry Potter series and the first official Harry Potter story to be presented on stage. The play will receive its world premiere in London’s West End on July 30, 2016.

It was always difficult being Harry Potter and it isn’t much easier now that he is an overworked employee of the Ministry of Magic, a husband and father of three school-age children.

While Harry grapples with a past that refuses to stay where it belongs, his youngest son Albus must struggle with the weight of a family legacy he never wanted. As past and present fuse ominously, both father and son learn the uncomfortable truth: sometimes, darkness comes from unexpected places.

Since it premiered in the West End, I’ve often walked by the outside of the theatre on my trips to London, and posed for photos in front of the nest with the child in it. But that, and the cover of this book was all I knew about The Cursed Child. I knew it was a continuation of the Harry Potter stories, years after the books had finished, but I had no clue about the plot.

So when I finally read it (after reading all the Harry Potter books, and the spin-offs) the plot came as a shock to me, but I’m glad I didn’t have any idea what would actually happen. The synopsis doesn’t really give a lot away about the fundamentals of the plot, and obviously I’ve not seen the play. I think not knowing anything about it was the best way to come into this, but I can’t review it without discussing the plot. So if you’re here and you haven’t read the book, then I recommend getting a copy and reading it first. I’ve no doubt you’ll form your own opinion, and then come back to reviews to see what other people thought. It’s an interesting one, trust me.

If you have read it, and your curious about what I thought, then here we go.

The end at the beginning

I’m fresh from finishing the main Harry Potter series, so I remember the ending to The Deathly Hallows well, and this is where this script kicks off. We see those same scenes at King’s Cross station where James and Albus (Harry’s sons) are waiting to board the Hogwarts Express, Albus for the first time. Some of the dialogue in that scene is repeated word for word, which I quite liked. But little bits are added, and of course this is in script form, so it feels more like we’re actually in the scene watching it happen in real-time, rather than the slight distance of a novel.

It is only when we get to Act One, Scene Three that we’re into new territory. We’ve got Albus and Rose Granger-Weasley trying to decide where on the train to sit. Rose adds weight to this decision, pointing out that it was on their first journey to Hogwarts that their parents met. Enter Scorpius.

Scorpius is the son of Draco Malfoy. I was predictably wary of him at first, thinking ‘Albus, don’t get involved’, but having read the entire thing, Scorpius is my favourite character. I love his dialogue, his personality, his wit, his nerdiness. I think I’d like to be friends with him! He’s nothing like the kind of student his dad was, but then again I always felt we weren’t getting the true Draco. But in this book, we definitely do.

We soon find out that there’s a rumour plaguing Scorpius and what people think of him. There’s a rumour that his parents couldn’t have children, so they sent his mother back using a Time-Turner and that as a result, he is Voldemort’s son.

I was really intrigued by this, but I had a feeling he wouldn’t be his son. It’s the Time- Turner that really got me excited. The third book, Prisoner of Azkaban, was one of my favourites in the series because of the Time-Turner. I love anything to do with time travel, and this book has a lot of it.

In a nutshell, Albus and Harry have a tricky relationship, Albus is put in Slytherin and he decides that Cedric Diggory didn’t need to die because of getting mixed up in Harry’s fight with Voldemort. So out of spite of his dad, but also thinking he’ll be doing something heroic, he wants to use this Time-Turner to go back and save Cedric Diggory.

We’re going back in time

What ensues is some kind of cross between Back to the Future and the Harry Potter books. I won’t go into much more detail about the actual plot now, but it really got a reaction from me. I had to keep reading! I was getting stressed on behalf of Albus, begging with him as a reader to think about the consequences and how much he could ruin. It was mind-blowing at times, and although this plot was unexpected, I enjoyed it. But on the other hand, I didn’t expect time travel to be the main aspect driving the narrative. Somehow it made it feel a bit like when sitcoms are running out of episode ideas, so they do a time travel or alternative universe episode instead. It’s fascinating, but I’m left wanting something else. Something that doesn’t go back into the stories I’ve just read.

However, I’m slowly growing to appreciate it. Like I said, I’m actually a huge fan of time travel narratives, and the Back to the Future films are my all-time favourites. I just didn’t expect the Harry Potter universe to go that way as heavily as it did here.

What I’m most thankful to this book for is the Malfoys. I’ve got the satisfaction of Draco being redeemed, and I adore Scorpius. I think he brings out the best in Albus, and they’re a great team. I loved the affection between them and the honesty with which they told each other how much their friendship meant.

There are so many other details and nuances of the story that I could talk about and discuss, but if you’ve read it, you’ll know.

I kind of want to go and see the play for real now.

Link to the book on Goodreads: Harry Potter and the Cursed Child

Link to the theatre production website: Harry Potter and the Cursed Child (productions)